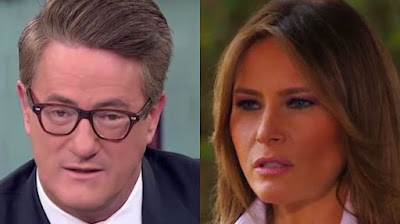 Daily Mail reported that Scarborough accused Melania of exhibiting “faux outrage” over Karlan’s comments about her son. As soon as Karlan brought up Barron’s name during her testimony, Melania took to Twitter to defend the child.

“A minor child deserves privacy and should be kept out of politics,” Melania tweeted. “Pamela Karlan, you should be ashamed of your very angry and obviously biased public pandering, and using a child to do it.”

On “Morning Joe” the next morning, Scarborough called the First Lady out.

“By the way, Melania Trump, I’m still waiting for her to ask her husband to apologize for face-shaming my wife, lying about my wife, saying that she was bleeding badly from a facelift, taking a personal conversation, a private conversation and she … never did anything,” he said. “I think she actually attacked Mika. And for her husband lying and face-shaming and talking about, you know, seriously … think about all the people that Donald Trump has attacked viciously and Melania Trump has quietly sat by and said nothing.”

Scarborough was referring to a tweet President Donald Trump posted about his wife Mika Brzezinski back in June of 2017.

“I heard poorly rated @Morning_Joe speaks badly of me (don’t watch anymore),” Trump wrote at the time. “Then how come low I.Q. Crazy Mika, along with Psycho Joe, came to Mar-a-Lago 3 nights in a row around New Year’s Eve, and insisted on joining me. She was bleeding badly from a face-lift. I said no!”
https://pagead2.googlesyndication.com/pagead/js/adsbygoogle.js
Scarborough and Brzezinski fired back by claiming that she “never had a face-lift” while conceding that she did “have a little skin under her chin tweaked, but this was hardly a state secret.”

Karlan, a Stanford Law professor, was widely criticized for bringing up Barron during her testimony on Wednesday.

“Kings could do no wrong because the King’s word was law, but contrary to what President Trump says, Article II does not give him the power to do anything he wants,” Karlan said. “The Constitution says there can be no titles of nobility, so while the president can name his son Barron, he cannot make him a baron.”

“I want to apologize earlier for what I said earlier about the president’s son,” Karlan said. “I wish the President would apologize, obviously, for the things he’s done that’s wrong but I do regret having said that.”