On Wednesday’s episode of the ABC talk show “The View,” Whoopi Goldberg spoke out to slam the members of Congress who skipped an event honoring the victims of the September 11 terrorist attacks that morning. 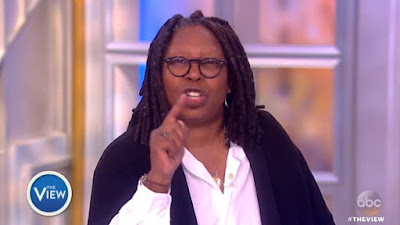 Fox News reported that Congress observed a moment of silence on the 18th anniversary of the terrorist attacks, but Goldberg was furious about the low turnout from lawmakers.

“Not everyone is honoring moments of silence, apparently only 26 percent of House members showed up to the moment of silence on the steps on the Capitol this morning,” a furious Goldberg said during a segment about public school students honoring the victims.

Her cohost Meghan McCain agreed that the low turnout was “shameful,” but Goldberg didn’t stop there.

“We don’t know why they weren’t there, but this might not have been the right day to screw around with the optics. I’m just saying, this is a moment that affected everyone in this country. Not just New Yorkers. They came for America,” Goldberg said. “They hit us here first and then went other places to take us, try to take us down. That affected many more people than just us here, and this is an American issue.”

She went on to add that every single member of Congress should have been there for the moment of silence.

“Every one of you should be out there, honoring what you didn’t have to do, that they did,” Goldberg said.

NY PASSES 9/11 MOMENT OF SILENCE LAW FOR SCHOOLS: The co-hosts discuss how students will have a way to honor and understand the history after a new law “allows for a brief moment of silence” in the state’s public schools on the anniversary. https://t.co/AeiL5FvlPg pic.twitter.com/9KbLbx4DYX

On Wednesday morning, memorial ceremonies took place at Ground Zero, the Pentagon and at the Flight 93 National Memorial near Shanksville, Pennsylvania. President Donald Trump was at the Pentagon’s ceremony to honor 9/11 victims with a speech.

“For every American who lived through that day, the September 11 attack is seared into our soul,” Trump said. “It was a day filled with shock, horror, sorrow and righteous fury.”

“For the families who join us, this is your anniversary of personal and permanent loss,” President Trump continued. “It’s the day that has replayed in your memory 1,000 times over: the last kiss, the last phone call, the last time hearing those precious words, ‘I love you’.”